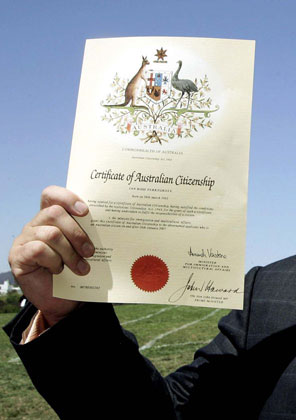 The question has to be asked if Australian employers view their country kin as lazy.  This after a recent survey by the Australian New Industry Department found that employers perceive Australians to be less hardworking than their colleagues settling in the country from countries like South Africa.

The report further revealed that 37 620 foreign employers on the Australian 457 visa have already been hired in the past nine months while 200 000 qualified Australian nationals remain unemployed.

It seems that some Australian employers are opting to fill vacant posts with migrants rather than relying on the available pool of job seekers in Australia.  The reason for this; Australians in certain industry sectors are considered lazy and less thankful for their employment.

The report says that Ozzies have been nicknamed “Lozies” (a derivative of the words lazy Australians) and it seems that the survey supports this claim by employers.

The 457 Australian visas allow foreigners to legally work in Australia.  These include executive level managers, professionals across a wide range of occupations and tradesman.

With the considerable increase in granted 457 visas it seems the demand for employing migrant workers have not lost momentum.

While 200 000 unemployed Australians are being shunned by Australian employers it seems that it was not a lack of experience or education that lost them the job but rather their attitude towards employment and  lack of commitment to working hard.

Spokesperson for the Abbott government’s opposition party, Brendan O’Connor said it is critical that the Australian government apply more effort to ensuring that unemployed Australians enjoy preference when interviewing for vacant posts.

But it seems that Australian business owners are hard pressed to find appropriate staff from the available pool of job seekers.  In a statement to the Sydney Morning Herald employers said that foreign-born workers were considered more reliable and willing to add more value to the company they work for.

Speaking to the Sydney Morning Herald the owner of a restaurant said, “I'm just not gonna hire Aussies anymore,” after he had been disappointed by Australian staff on an ongoing basis.

“Aussies don't want to work. Or they won't work weekends or public holidays. Or they can only work these days and not those days. Or they ring up and say they're sick and they were drinking with me the night before. Or they have to take a week off to go to Splendour,” he added.

Further research seems to suggest that many Australian-born people these days consider certain jobs to be beneath them.  This is especially the case in the service industry.  “Many young people, it seems, would prefer to be on the dole than do jobs like that [the service industry],” reported Melbourne’s Herald Sun.