Canada is a great place for everybody finds survey

These are the findings of a new survey which placed Canada as the 6th best place for expats to live and work in the world. 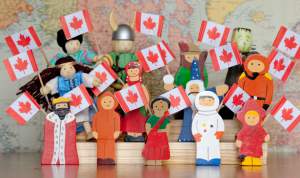 The prestigious honour of being a fantastic country, for expats especially, was given to Canada by a recent global survey.

The respected surveyor HSBC Expat Explorer found that expats living in Canada were particularly happy, ranking the country as the 6th best in the world in their 2015 survey.

While Canada ranked 6th overall it was placed first when it came to tolerance, and about two thirds (66 per cent) of survey respondents said their quality of life in Canada was better than in their home countries.

"Canada was one of the first countries in the world to legalize gay marriage in 2005, and it pursues a policy of multiculturalism," the survey's report on Canada says. "Expats rank it as the most welcoming destination worldwide regardless of a person's age, faith, race, gender or sexual orientation."

Expats either living in Canada or having lived there before was full of praise for Canadian life, describing it as an "exciting" country that is "never boring."

"(Living in Canada has been) a liberating experience which has allowed new exciting perspectives and opportunities for my young family. We live in a beautiful and uncluttered environment," A U.K. expat told HSBC.

Another expat, from Romania, offered advice for making the most of Canada's diversity:

"Be open minded and do not look only for people from your own country! Make friends from all over the world and embrace cultural differences."

The Expat Explorer Survey is one of the largest independent global expat surveys, HSBC says on its website.

The survey uses responses from almost 22,000 expats based in more than 100 countries to rank the best places in the world to move to and work in reported CTV News late last week.

The survey ranks countries based on responses in three categories: experience, family, and economics.

For each category, respondents are asked how the country they're living in scores in a number of areas, from culture and safety to social life and childcare quality, and disposable income and entrepreneurship.

Those scores are then averaged out for overall rankings and Canada did extremely well, ranking sixth in experience, eighth in family, and 11th in economics.

And on the economic scale, Canada was sixth for entrepreneurship and politics, 27th for disposable income and 14th for work-life balance, resulting in an overall ranking of 11th.