According to report discussed by the minister as many as half of the skilled immigrants qualified to apply for permanent residency within the first three weeks of the launch of a new immigration system were not applying from abroad but were already in Canada, CBC News has learned. 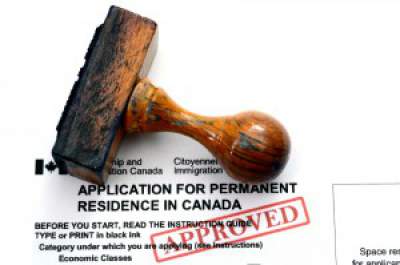 Canada launched a new system known as express entry on 1 January this year. The system serves as a way to recruit the best and brightest of foreign nationals to fill open jobs for which there are no available Canadian workers.

The report, obtained by immigration lawyer Richard Kurland through an Access to Information Act request, shows there were 775 candidates who made it to the top of the express entry pool in the lead up to the first-ever draw. The new data lists their country of residence and their citizenship.

According to this information, published on 22 January, by the Canadian Department of Immigration and Citizenship 346, or 45 per cent of "the top 775 candidates in the pool" already lived in Canada. While thirteen per cent were living in India, followed by 4.5 per cent in the United Arab Emirates and smaller percentages residing in other countries.
At the time of the first Express Entry draw on 31 January the government offered permanent residency to 779 skilled workers in its first draw.

"Express Entry is already getting impressive results in its first month," declared Immigration Minister Chris Alexander in a written statement issued on 2 February
"The fact that everyone who was invited to apply for permanent residence in this round of invitations already has a valid job offer or provincial nomination shows that Express Entry is working to fill Canada's existing labour market gaps," Alexander said.

How does the new express entry system work?

The Canadian Express Entry system means that individuals with a job offer or a provincial nomination are considered top candidates. Applicants can see how they rank in the pool, based on a point system.

A draw is held every two weeks to determine who receives "invitations to apply" for permanent residency.

Once an invitation is received, a prospective immigrant has 60 days to accept or decline.
If an applicant doesn't receive an invitation after 12 months, he or she has to apply again.
The first 779 skilled workers, according to that same statement, included "professionals in natural and applied sciences, and industrial, electrical and construction trades."

Kurland said "the overwhelming majority would be expected to be temporary foreign workers" because the new points system rewards people already working in Canada.
Under the express entry points system, skilled immigrants who receive a permanent job offer backed by a positive labour market impact assessment are among the first to receive an offer to apply for permanent residency. (The assessment, or LMIA, is a document employers need to hire a foreign worker over a Canadian one.)

While immigration officials have publicly stayed mum on the subject of giving temporary foreign workers permanent residency through express entry, they have been more open to discussing the matter with stakeholders.

Sarah Anson-Cartwright, the director of skills policy at the Canadian Chamber of Commerce, told CBC News she has had numerous conversations with immigration officials who said the majority of candidates that were offered express entry at the onset were temporary foreign workers.

"The first three draws for express entry were mostly temporary foreign workers with valid LMIAs," Anson-Cartwright said based on exchanges with officials from the Department of Citizenship and Immigration.

The government picked 779 skilled workers in its second draw on 7 February and 849 in the third draw on 20 February.