All Approved ZSP permits to be issued by August 2015

The ZSP is the successor to a permit issued as part of the Department's Dispensation of Zimbabweans Project (DZP) which was implemented in April 2009. The acceptance of new applications closed last year, but issuing thereof is still an ongoing process. 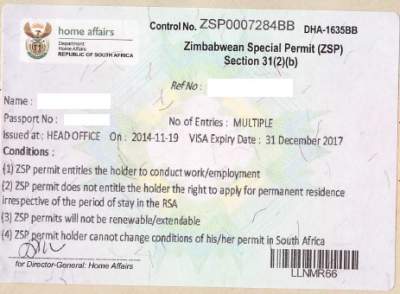 The new ZSP will be valid until 31 December 2017, and all those whose permits were rejected will be allowed to appeal against the decision within ten working days of receiving the response.

Despite the processes finalization, many issues still remain unresolved. Reports of applications being "lost" in the online system have been prevalent, as well as applicant who have received their permits with errors and after sending the permits for correction, the permits were not returned. The Department has yet to address these complaints.

Holders of the ZSP permit will be allowed to live, work, conduct business, and study in South Africa for the duration of their permits.