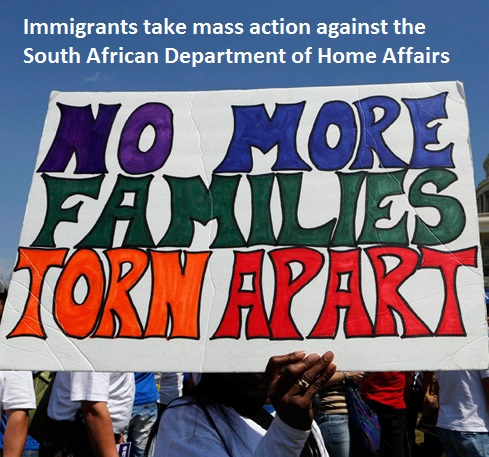 A six week long battle for immigrants in South Africa, affected by newest immigration and visa legislation, has culminated in what can only be described as a mass action lawsuit. Now a five-year-old girl has also been declared an ‘undesirable’.

Almost 1000 immigrants have filed urgent applications in the Western Cape High Court to force the South African Department of Home Affairs to get their house in order.

Immigrants who have been awaiting the processing of their visas by the Department of Home Affairs are facing the threat of being declared ‘undesirables’. Under the new law, gazetted on 26 May this year, any person in violation of their visa conditions will be branded an ‘undesirable’ and will be refused access to the Republic for as much as five years.

Immigrants claim that the department failed to do their job which resulted in the issuing of many visas being delayed or missed.

Many immigrants have told their stories of frustration and anxiety resulting from the Department of Home Affairs’ unpreparedness in dealing with the massive task at hand. Not only was it clear that the department’s staff was undertrained, the hardline stance on visa conditions contributed to an already flammable situation.
New World Immigration has reported on a number of such situations and their reports are supported by other reports of mirror situations. South African Jean Du Toit also took his and his Ukrainian-born wife’s case to the press.

In a letter to News24 Du Toit, told how his wife Irina Tokar, had applied for a permanent residence permit more than 60 days before the expiry of her temporary visa. All the couple had received from the department is a letter acknowledging receipt of the application. Du Toit said his wife had gone home with the couple’s 9-month-old baby to attend to an urgent family matter “but not before she was declared an undesirable person and banned from South Africa for 5 years,” said Du Toit.

“She launched an appeal with the Department of Home Affairs, but to date [have not received] acknowledgement of the appeal,” said Du Toit.

With the department failing to process permit applications, immigrants are unable to access medical or banking services and could be arrested or deported.

Now a five-year-old child has become the latest victim of the controversial new South African immigration regulations, being declared “undesirable” when the family left the country to visit Turkey.

Requiring intervention by the Western Cape High Court on Friday the girl was finally permitted to enter and remain in South Africa subject to conditions prescribed by the Department of Home Affairs.

The young girl is the daughter of a high-ranking UN official who had been living in South Africa on a visitor’s visa. She was the only family member without South African permanent residency having been born in the US in 2008.

The little girl’s visa expired 115 days before she and her family left South Africa for Turkey. As the family passed through passport control on their way out of South Africa, they were told that their little daughter had been declared undesirable in terms of new immigration regulations.

“We were not interviewed before this decision was made. No questions were put to us. No submissions were sought. No explanation was given,” the father said in an affidavit.

The fact that the child had been barred from returning to South Africa affected the entire family as it meant none of them could return home.
“We cannot leave her there as a result of her age - she is five years old. (Her sister) is forced to remain with us for the same reason - she is only nine years old,” the father said.

“These effects are extremely grave to us as individuals, parents, spouses and siblings, and to us as a family,” the father said.

Frustratingly, after the father had been told by passport control that he could apply to the minister of Home Affairs to have his daughter’s status as an undesirable waived he received no response from the department after he logged his appeal.
The father asked the court to order the minister and department to allow his daughter to return to the country based on the fact that the family’s constitutional rights had been violated. As a result the little girl was allowed to stay with her family.