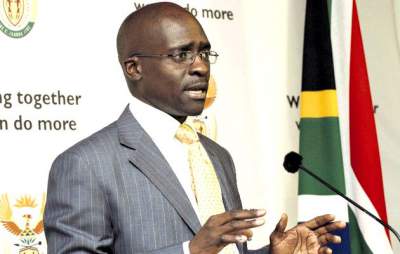 On Sunday President Jacob Zuma announced his new cabinet and confirmed that Malusi Gigaba would replace Naledi Pandor as Minister of Home Affairs.

Gigaba, was the head of the ANC’s election campaign in 2014 and said the ruling party was humbled by the win.

“We are very grateful winners. We are humbled. We are not complaining at all. We will not seek to try and satisfy everyone.”

Outspoken from the onset Gigba accused the EFF of being “sour losers” in his response to the Economic Freedom Fighters' complaint about votes in Gauteng coming in slowly, allegedly after counting having been completed in the province.

“They need to stop being sour losers and accept they only have one million voters and they have lost,” he told reporters at the IEC national results operations centre in Pretoria earlier this month, a day after the national elections.

Born in Eshowe, KwaZulu-Natal, 42 year old Gigaba was first elected to the National Assembly of South Africa in 1999 as part of the African National Congress.
Gigaba was very vocal against xenophobia while serving as Deputy Minister of Home Affairs in 2010. He actively advocated for the acceptance of all Africans in the South African system.

Gigaba was Deputy Minister of Home Affairs in 2010, when the 2010 permits were issued, and understands the reasoning behind the controversial process. These permits issued under the special dispensation for Zimbabweans meant that permit-holders would have to re-apply for permits when they expire in December this year.

Consequently Minister Gigaba has been instrumental in the new visa /permit system working closely with Dr. Nkosazana Dlamini Zuma. The new system will allow easier access for migrants between South Africa and Zimbabwe.

"Cabinet approved the approach on the expiry of permits issued under the special dispensation for Zimbabweans in terms of which permit-holders will be expected to re-apply for permits," the department said in a statement.

"As per Cabinet decision, the minister of home affairs will in due course provide more clarity on the process to be followed and the date of commencement."

His efforts to bring about progressive changes at the Department of Home Affairs were recognized by the human rights organization PASSOP and by Adbell Musati, whose Zimbabwean brother starved outside a South African Home Affairs office.

New World Immigration will continue to keep all clients updated, please don’t hesitate to submit an enquiry should you have any questions or queries.