Getting a new upgraded child passport will make traveling over South African borders a lot easier for parents. The new upgraded passport is much more user friendly and takes only days to be issued.

In 2014, then Minister of Home Affairs, Malusi Gigaba introduced strict new rules for traveling in and out of the country with minors.  The rules were designed to combat serious crimes such as kidnapping and human trafficking. 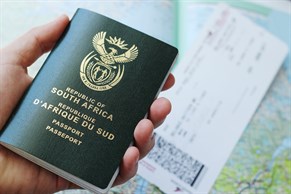 The new law requires parents traveling with a child to present not only the child’s passport but also their unabridged birth certificate if they hoped to cross any of South Africa’s border posts. If one of the biological parents named on the unabridged birth certificate is not present at the border post a letter of consent from the absent parent giving consent for the traveling parent to cross the border must be produced – this is still the case.

The infamous new rules initially created havoc as improper planning meant many parents were unaware of the rule or had misinterpreted it which saw thousands of people exiting and entering the country turned away at South African border crossings.

As the Department of Home Affairs speeds up its modernisation programme to a paperless system an important and welcoming change to South Africa’s passport for minors is that the details of the parents are now automatically included in children’s passports.

When you apply for the passport of the child, the system automatically enters the National Population Registry and confirms the details of the child's parents and includes it in the child’s passport. The child’s unabridged birth certificate with the details of the child and parent(s) are printed at the back of the passport. This means parents or unaccompanied minors will no longer need to present a separate unabridged birth certificate.

Foreign nationals entering South Africa will unfortunately still have to carry their children's birth certificates if the parents’ details are not printed on the child's passport.

However, the South African Department of Home Affairs have made suggestions to the international body which manages the issues of travelling globally that children's passports should, as a rule, include the details of the parents.  Should the application be successful it will become standard practice all over the world to include the details of parents in a minor’s passport.

What you need to apply for a minor’s passport: